MORE TALES FROM THE ROAD

MORE TALES FROM THE ROAD

MORE TALES FROM THE ROAD
April 23, 2015
By Michael Erlewine (Michael@Erlewine.net)

We are winding down to the departure of the Karmapa in a few days. So many events, so many tired folks, including His Holiness. What was planned as a bit of a vacation for him certainly never materialized. He is busy all the time. Let’s see, I started out yesterday at 2 AM. In the early morning I helped clean up and watch over a room where the Karmapa blessed many hundreds of small statues. He came with his security team and part of his entourage. I held the door for him and watched while he did the blessings.

Next I helped with perimeter security while His Holiness planted a couple of trees in a somewhat elaborate ceremony at the monastery, with speeches by the mayor of Woodstock, different denominations of clergy (Zen, Christian, etc.), and so on. The day’s main event took place in a huge tent down in Woodstock on a rainy day. It was all mud and grass, and it oozed deep inside the tent. A good crowd turned out to see the Karmapa and hear him speak. One thing His Holiness looked forward to in this trip was speaking to the people of Woodstock. Later, the Karmapa had groups in for audiences all afternoon.

I also took part in various meetings and what-not. The highlight of the day was an interview with our teacher of 32 years, the Ven. Khenpo Karthar Rinpoche, who is now in his nineties. This was a chance to share with Rinpoche what is going on with my family, my practice, and whatever questions I might have. And so it goes.

Meanwhile, back at our house in Michigan, we have been gone so long that our house- sitter Zachary Ray reports that our dog Molotov has taken to going in my office and howling. He misses me. There apparently was no consoling him until Zach downloaded a couple of podcasts of me speaking and placed a tablet computer on the couch where he likes to sleep and played my voice. He immediately settled down and was content. I feel terrible he is so alone, but aloneness happens to us all sometimes.

Today I am packing up all my video equipment and Margaret and I are heading up to Karme Ling, our three-year retreat center, to film His Holiness visiting there. That’s all the news that’s fit to print. 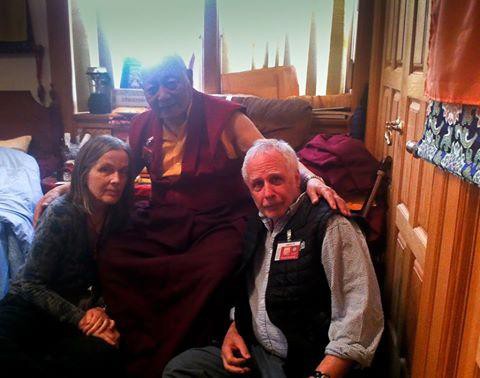 [Here is a pretty-bad photo of Margaret and me with Khenpo Karthar Rinpoche, our teacher, taken with an iPhone.]
Top
Post Reply
1 post • Page 1 of 1