Bob Masse is, without question, Canada's most celebrated rock poster artist and his extensive use of the Art Nouveau style and old images makes him one of the most easily recognizable rock-art artists in the world.

Born Robert Joseph Masse on April 5, 1945 in Burnaby, British Columbia, Masse was drawing from an early age and recalls competitions with a cousin as to who could draw the most pictures of Bugs Bunny. And Mad Magazine was a major influence. He would copy images from every issue, from the first page to the last. During his teens, Masse often worked through the holidays, providing window decorations and graphics, even creating large cardboard Santa's'.

Masse, much like Stanley Mouse and other artists, grew up building model cars, drawing hot-rod cars and hot-rod monster T-shirts. He mastered the art of pin striping cars, adding flames and other graphics.

After high school, Masse attending the old Vancouver Art School, but says he was fading out by the fourth year. By that time he was taking on various commercial art projects and starting to get poster jobs at the local coffeehouses. Masse states his whole take on art changed with the sixties.

In the early Sixties, Vancouver, which Masse claims tended to run a couple years behind what was happening in the San Francisco area, was still entertaining beatniks and the beat scene. Coffeehouses were yet in vogue. This was before the transformation of the beatnik life style into that of the hippie and the subsequent replacement of the coffeehouse with the dance hall, as the place to be. Some of Masse's earliest work appeared in the Bunkhouse, for acts like Gordon Lightfoot, Ian and Sylvia, and other folk-style acts. He wasn't even charging for much of his work at that time, content with a chance to meet and spend time with the visiting music acts, attend all the parties and, generally, just hang out. His focus began to change from the coffee-house/folk scene to the emerging rock dance-hall scene. He went on to do a number of significant pieces for the Afterthought and other venues, including the new dance and rock-oriented places like the Retinal Circus. 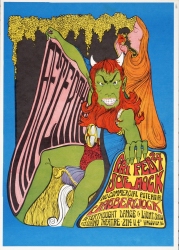 Masse credits his trips to San Francisco during the early days for inspiring him, in particular the work of Rick Griffin, Victor Moscoso, Wes Wilson, Stanley Mouse, and, above all, the Art Nouveau style. "I went nuts with that style," says Masse. Where others dipped into the Art Nouveau style to enhance their poster style Masse embraced it openly and set about to fully incorporate it within his own vision. He clearly has grasped the style of Art Nouveau artists like Alphonse Mucha, bringing the delicate designs, engravings, and colors to another generation. Masse's metamorphosis of the Art Nouveau style poster is immediately recognizable and much loved.


Masse made frequent trips to the states, particularly to the Bay Area and to Los Angeles. It was on a trip to San Francisco and the Haight-Ashbury District in 1966 that his eyes were opened to what was happening in venues like the Avalon Ballroom and the Fillmore. The Bay Area was a year or two ahead of the more conservative Vancouver, and Masse's posters helped to spread the word in Canada, with his version of the San Francisco-style psychedelic poster.

When a local Vancouver band, the Collectors, went to Los Angles to cut their first album, Masse went with them to do the album cover, hung out at the recording studio, and ended up living in the Laurel Canyon area for much of 1967 and 1968, producing ad work for venues like the Whisky-A-Go-Go, the Cheetah in Venice, and the Magic Mushroom, in Studio City. He was also doing work for a lot of pop festivals in the area at the time. 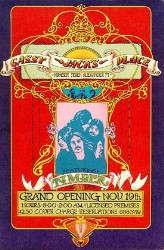 Late in 1969, Masse returned to Vancouver to produce what are considered some of his most collectable pieces, posters for venues like Gassy Jack's, Moose Valley Farms, and the Retinal Circus. As the '60s era waned, Masse once again found work doing cartoons and commercial illustrations for companies like McDonalds and many other firms. In the 1980s he created a number of movie posters, including ones for "Back to the Future" and "Total Recall." His television work includes graphics for the "Teenage Mutant Ninja Turtles" series.

In the early 90's, although Masse continued to produce commercial art, including the little furry fox mascot-logo for radio station C-FOX, there began to be a surge in music memorabilia collecting. A number of his earlier posters were in great demand by collectors.

Masse found himself once again fully engaged in turning out posters in his classic '60s style as well as continuing with his more contemporary graphics. Masse credits the Internet for making his work available to a wider audience. "Otherwise, I'd be stuck with the Vancouver economy." In recent years, Masse has reprinted several of his most popular '60s posters.

Masse is quoted in an excellent interview by Paul Gouldhawke for Psychedelicatessen in March, 2000:

" I don't really do my posters in a modern way; I still do it in the old fashioned way. Except for hand overlays. I'm doing full color pieces, paintings that are color separated. There's a lot of computer cheating that I could use, borders could be computer generated, lettering can be generated by computers but I don't do that. I still hand do everything. So consequently I can't do that many a year, I can maybe crank out 6 to 8. It almost takes me 2 months to do a piece. They take a long time. They're very time consuming. That's the way I like to do it, I don't feel right if I'm cutting corners - I feel like I'm cheating people in a way. They're all very complex pieces. That's what people like. "

Today, Masse is one of the few original poster artists still working full time, with more work than he can handle. Bob Masse has become more popular and collectable, as time moves on. He has no credible imitators.
Top
Post Reply
1 post • Page 1 of 1

Users browsing this forum: No registered users and 0 guests